The Lynton and Lynmouth funicular Cliff Railway opened in 1890 and is the highest and steepest totally water powered railway in the world! That’s why we put it on our list of places to visit this year, it’s about an hours drive in North Devon. 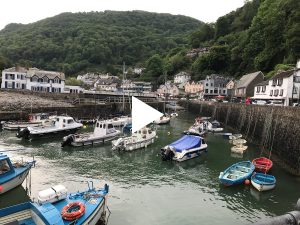 We parked at the top in the village of Lynton which features gifts shops, cafes (including the famous cliff top café at the entrance to the cliff railway), galleries and even a small museum. We decided to walk down and catch the railway back up. On the way we saw a sign for ‘Valley of the rocks’ so headed there first. It is a dry valley and the narrow footpath towers above the cliffs with spectacular views across the coast. It’s definitely not for those with a fear of heights! After taking in the beautiful scenery and spotting some wild goats we headed down the footpath to the pretty harbourside village of Lynmouth.

Lynmouth also features quirky gift shops and an abundance of places to eat whether it is for a cream tea or some delicious fish and chips. The East Lyn and West Lyn Rivers meet here and the scenery is breath-taking. It also has a putting green where you can choose to play 18 or 36 holes, this was great fun and after exerting lots of energy we had to have an ice cream to cool down! 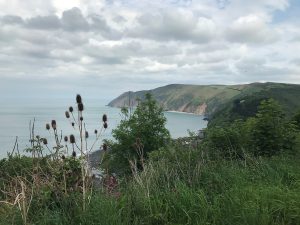 It was now time for us to venture onto the Cliff Railway back up to Lynton. We had to queue for a little while but were rewarded with spectacular views on the ascent. It takes a few minutes to rise the 500ft but is a unique experience travelling up the side of a cliff in an open air car!

We didn’t have time to go to the area described as ‘England’s Little Switzerland’ but there is a walk along the East Lyn river from Lynmouth to Watersmeet featuring deep Exmoor gorges, ancient oak woodland, waterfalls, lichen covered rocks, crystal clear rivers and rare flora and fauna. That’s on the list for when we return again!